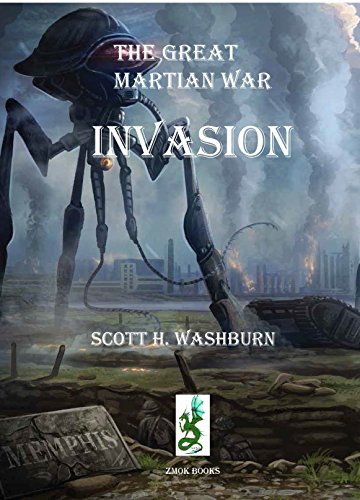 I’m not a science fiction reader. Yes, an odd statement to make when I’m writing sci-fi regularly as well as watching it. Truthfully, I find it hard to connect to a lot of the classic sci-fi ...

I’m not a science fiction reader. Yes, an odd statement to make when I’m writing sci-fi regularly as well as watching it. Truthfully, I find it hard to connect to a lot of the classic sci-fi heroes and the often convoluted styles of the original sci-fi masters. They’re amazing stories, don’t get me wrong, but as a consumer of genre fiction, I usually pass on the sci-fi epics.

Full disclaimer: the author, Scott Washburn, is my very own father. While I’ve stuck with fantasy as my main focus, my dad has written many novels in both genres. One of his true passions, however, has always been history. Particularly, American military history. This is a very obvious factor in his choice to continue Wells’ infamous novel into a lovely mix of what-ifs and a lovely homage to the original War of the Worlds‘ mythos.

You have the Martians–named Martians, who are far more than sickly monsters at the controls of death machines. While the complex nature of their politics is left for future books, Washburn tackles the difficulties of writing alien characters quite well, I think. They’re alien, but not that different on some levels. Failure scares them and so does the possibility they may have underestimated these pesky humans who are strangely hard to kill.

The human cast of Invasion! gives us an array of soldiers, politicians (including Teddy himself!) and hopeful human survivors who endure the new Martian onslaught. This is a story about American heroism, to be certain, and it plays right into the history of that era. While not delving too deeply into the politics of the time, I found myself enjoying those historical nods to real leaders or famous names like Nikola Tesla, who is probably the only one thrilled by the idea of Martian lasers to toy with. I really enjoyed the

The parts of the story that lagged for me were mainly the parts I knew I would have trouble with: the descriptions of the new machines as well as military organization. While I certainly inherited my parents’ love of history, I can’t say I’m on the fanatic level like my dad. But I did recognize that if you’re looking for historical sci-fi, this is absolutely the series for you. Every detail is well-researched and even the sci-fi elements brought in by the Martians are clearly weighed by the author in a realistic-to-fantastical balance. Details bring a story to life and the details here certainly leave the reader thinking, wow, this could have happened.

It’s hard to grade a family member’s work, but honestly, I loved the details in the story and I love the what-ifs of this kind of genre mix-up. It’s meticulous but also has human heart, with characters you cheer for, if they’re the lucky ones. 4.5 stars for depth and emotional quality (because hey, the horse makes it, guys.)